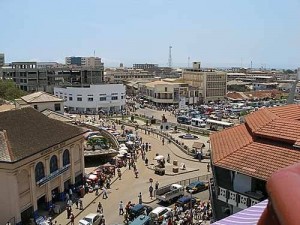 I just returned from my first trip to Accra, Ghana where I was able to meet industry officials, several operators and a few broadband/Internet players. Economically, Ghana is booming with 8% growth projected this year. The country is benefiting from recent discoveries of oil and natural gas, as well as continued strong demand for gold. Formerly know as the “Gold Coast” during colonial times, Ghana is the second largest exporter of gold after South Africa on the continent. However, it was obvious from my visit that the economic story is much broader than just commodities. Real estate is booming with new office buildings and residential units going up everywhere. One development my guide informed me would be home to Ghana’s first Ferrari dealership. I was also impressed by the number and variety of service and retail businesses.  In driving around Accra to meetings, I saw many financial services, medical, banking and niche consumer businesses, much more than in other African countries that I have visited. In general, buildings and roads are well maintained and modern.

In perhaps the most bullish sign of future economic development, Ghana is experiencing reverse immigration. About 2.5M Ghanaians emigrated to Europe and North America, mainly to the US and UK. Now they are coming back. I can’t tell you how many of the folks I meet had lived in the US or UK and had returned to Ghana over the last 3 years. More are planning, such as my host who currently lives in New Jersey but is building a new home in an Accra suburb and hopes to return within a year. When smart, successful professionals from the US and UK vote with their feet that is a strong indicator of the continued growth of the country.

The telecom sector exemplifies the progressive nature of the Ghana economy. By most accounts, Ghana is the most competitive mobile market in Africa. The government early on privatized the state owned PTT and today there are five major international players battling over the market (Vodafone, Millicom, Bharti Airtel, MTN and Glo, plus a sixth smaller one, Expresso). Mobile penetration, measured by registered SIMs, is just over 100%. But all players expect it to go higher as some rural areas still lack coverage and people increasingly are using multiple devices (e.g., dongle for mobile Internet and also separate mobile phone). ARPU is around $4-$5/month, one of the lowest in Africa.  One of the operators I talked to said that only 1-2 operators are profitable at this level and expects pricing to go up as current rates are unsustainable.  All operators are embracing VAS and mobile Internet to boost ARPU. Ghana has three active submarine cable systems (legacy SAT-3, MainOne and Glo) and two more scheduled, WACS and ACE. International bandwidth prices have come down precipitately over the last year which has resulted in all the major players offering mobile Internet plans. Official figures indicate 35% mobile Internet penetration but my checks show real figures more like 10%-20% (read, big upside). Still, for Africa this is very high and will grow rapidly due to competition among operators and more submarine cable capacity. The Ministry of Communications is targeting 50% Internet penetration by 2015 and is pushing a large e-government initiative to promote adoption.  I was quoted about $200/MG (Accra to Europe), so there is still plenty of room for decline in pricing. I have no doubt that Ghana will be one of the first African countries with wide spread, affordable mobile Internet.