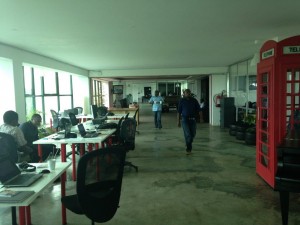 In September I visited Kenya to meet with some local telecom and Internet companies.  One of the firms I met was Kili.io.  Kili is a managed hosting business run by Adam Nelson.  Adam recently relocated from NYC where is was active in the tech scene working at a number of Internet businesses, most recently as the CTO of Yipit.   I met Adam at his office location, an incubator called 88MPH.  The office is in a busy commercial district in Nairobi.  Getting off the elevator and stepping into the office, one would be forgiven for thinking they are in NYC or San Francisco.  The open layout, groups of young programmers hacking away at desks and overall environment of activity and excitement permeates the space.  I was instantly intrigued.

Kili.io is bringing public cloud infrastructure to African markets.  They are in the pilot phase currently in Kenya with a focus on supporting SMEs and startups and have a target launch date of January 2014.  As some readers might  know, Nairobi is the hub for sub-Saharan African startups and so it is the natural place for many new companies to prove their products before rolling them out to the other markets in the larger region.  The region has coined a new phrase for itself- the “Digital Savanna”.

Because cloud infrastructure is deployed around the world by various vendors using proprietary technologies, Kili has taken a standards based approach around OpenStack – a set of standards agreed to by IBM, HP, Cisco, Rackspace and others so as to keep clients comfortable that there is no vendor lock-in or proprietary technology that keeps them tied down.  The APIs used by Kili are also Amazon Web Services-compatible so that savvy organizations can take advantage of multiple clouds based on their regulatory and performance needs.  The pricing model is “pay-by-the-drink”, similar to AWS, and the company offers compute, connectivity and storage options for small and large workloads.  The company hopes by mid-2014  to expand to other regions outside of Kenya including South Africa and Nigeria – where much of the demand lies for infrastructure services.

While cloud is relatively new to African consumers, the business logic for local infrastructure is compelling.  Because of a lack of quality hosting companies like Kili, most content is still hosted in Europe or the United States.  This means that when a Kenyan eyeball hits the local Kenyan newspaper’s website, the packets travel out the country, over submarine cables to Europe, through terrestrial fiber to Amsterdam onto a server to retrieve the page and back again.  Ridiculous.  Kili which is hosted in a Tier III datacenter location near the Kenyan Internet Exchange will be able to dramatically improve performance for web properties.  The user experience will improve tremendously, and this should propel demand and the development of additional content.  And the teams intimate knowledge of Internet Infrastructure and application management means that customers will be confident to entrust their hosting needs to Kili.

Given my former tenure at Voxel dot Net and familiarity with the hosting space, I was immediately impressed with Adam and his team and the problem they are trying to solve.  As I’ve stated in other blog posts, my view is that the Internet in Africa is poised for strong growth and managed hosting will be a necessary component of its development.  After my visit Adam and I continued our conversations, decided to partner together,  and today I am an investor in the business.  We are excited about the prospect of bringing world-class hosting capabilities to the African market.