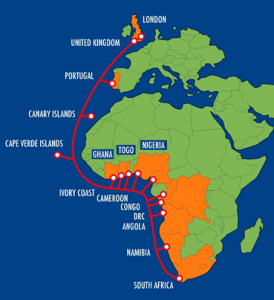 I had the opportunity to visit the West Africa Cable System (WACS) cable landing station in Limbe, Cameroon.  The WACS is a 14,500km submarine fiber cable the stretches from South Africa to Portugal and onto the UK.  The WACS cable is a consortium cable, owned by about 15 telcos. Some African governments have also invested in the system via ownership of their national PTTs.  The cable is designed with a capacity of 5.12Tbit/s, although it is initially configured with a much lower bandwidth level, around 500Gbit/s (basically, the number of wavelengths that are initially “lit up”).  Readers who follow submarine cable systems should be aware of this important fact – that most people report only the “Design Capacity” of the cable, not the actual bandwidth utilizable at turn-up.  This means that the amount of sellable bandwidth is much less than the reported amount.  Nonetheless, the cables are built to be upgradable and advances in DWDM mean the possibility exists for the cables to go way beyond the initial Design capacity, to as high as 30Tbit/s.  Unlike terrestrial fiber systems, submarine cables do not utilize a lot of fiber.  Intercontinental systems like WACS typically only have 4 fibers.  The reason is interesting.  Because the fibers must be armored and protected with thick layers of material and the cables also include power to feed the repeaters that are encased in the cable, a cable with only 4 fibers ends up being several inches in diameter.  To lay one of these cables, which cannot be bent, requires a huge wheel that has physical limitations depending on the size of the ship.  Given the size of the current submarine cable ships and costs to lay the cables, the industry has adjusted to lower fiber count cables and instead relies on advances in DWDM to increase capacity.  Unlike a US to Europe cables that might only have 2-4 splice points, the WACS system is scheduled to terminate in 10+ countries.  This leads to a clever design concept of utilizing one pair of fibers as “express” and one pair of fibers as “local”.  The express pair goes from South Africa to Lagos and onto Europe – the most heavily traveled route.  The other pair connects the “local” points along the way.  Obviously, one can imagine the latency differences introduced by this design into the routes.  The cables are trenched into the ocean at a certain water depth and brought into a “beach man hole”, basically a huge cement vault that anchors the cable into the ground.  From there the cable snakes its way underground to a nearby Cable Landing Station.  The Cable Landing Station is basically a single purpose Central Office, that houses the DWDM gear, power plant, back-up generators and termination of the fibers.  When I was there the CLS DWDM gear was being commissioned by Alcatel-Lucent.  The WACS system has been operational since about the middle of the year and is already making a huge impact in bringing affordable Internet access to Africa.  In locations where the cable has been commissioned and connected to terrestrial networks prices for IP and transit have fallen dramatically.  For Cameroon, the WACS cable will bring much needed redundancy and capacity to a country only served by the 10+ year old SAT3 cable. 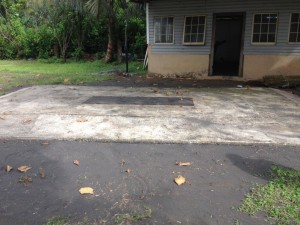 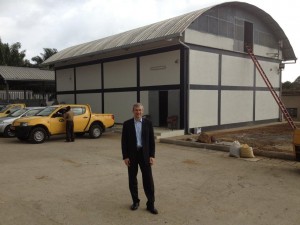